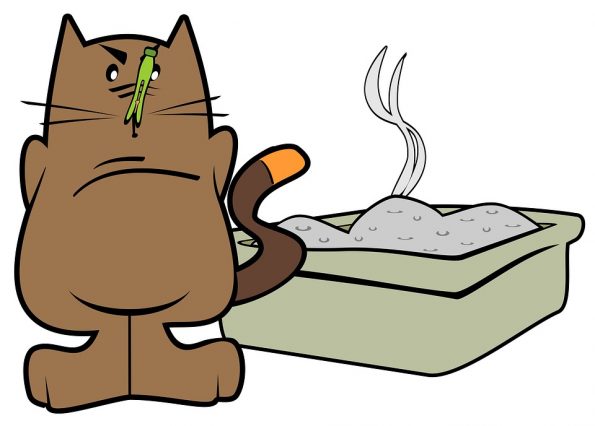 My cat is having accidents outside the litter box.  What does this mean?

Urinating in inappropriate locations has been reported as the number one behavior problem in cats.  In fact, a recent study found that when cats were relinquished to an animal shelter, owners listed inappropriate elimination as the top behavioral reason for giving up their pet.

First, it is important to distinguish spraying from other forms of urination.  Spraying involves urinating on a vertical surface, such as a wall, and is typically used to mark territory.  If spray pattern is seen near windows or glass doors, your cat may be responding to strange cats it sees outside.  Urination occurs on horizontal surfaces, such as in the litter pan or on the floor.

Inappropriate urination can be due to numerous medical problems.  Diseases that cause an increase in the amount of water a cat drinks can lead to increased urine production.  Diabetes, kidney failure, liver disease, and thyroid gland abnormalities can all result in excessive water intake and more frequent urination.  If a cat is painful, as happens with arthritis and other degenerative diseases, it may be too uncomfortable to climb into the litter pan.

There is another group of diseases, collectively known as feline lower urinary tract disease (or FLUTD), that is a common medical reason for urinary accidents.  FLUTD may be caused by inflammation in the urinary bladder, known as feline idiopathic cystitis.  No one knows the exact cause of this inflammation, but stress often is an important factor.

Other FLUTD disorders include urinary stones and urethral plugs, a potentially life-threatening condition more often seen in male cats.  If your cat is crying out when urinating, straining to urinate, has blood in the urine, or is urinating in small frequent amounts, an immediate veterinary evaluation is in order.

If a thorough work-up by your veterinarian rules out medical causes of inappropriate elimination, there are many behavioral reasons for those urinary accidents.  Some cats have litter substrate aversion and will only use specific types of litter.  One study found clumping, non-scented litter was the most preferred type, but not every cat agrees.  Experiment with different litter types to see which one is used most often by your cat.

Litter box type is also important for many cats, with most choosing non-hooded pans over those with a hood.

Be sure you have enough litter boxes for your cat family.  In multi-cat homes, one cat may “claim” a litter pan as his own, and confront other cats when they try to use it.  Placing litter boxes in various locations around the house can help ensure everyone has a peaceful place to eliminate.  There should be one more litter box than number of cats, so if you have three cats, you need to have four litter boxes.

The litter pans need to be cleaned regularly.  They should be scooped daily and washed with soapy water at least once every month.  A dirty litter pan is like a stinky port-a-potty!  If there is nowhere else to go, your cat may have no choice but to use the clean Persian rug.  And if conditions in the litter box are frequently found to be unacceptable, your cat may give up on litter boxes altogether.

Cats are the only domestic animals that have the instinct to routinely bury their waste – an instinct we can really appreciate.  So if your cat starts having accidents outside the litter box, carefully assess your home environment and have your veterinarian evaluate for an underlying medical cause.