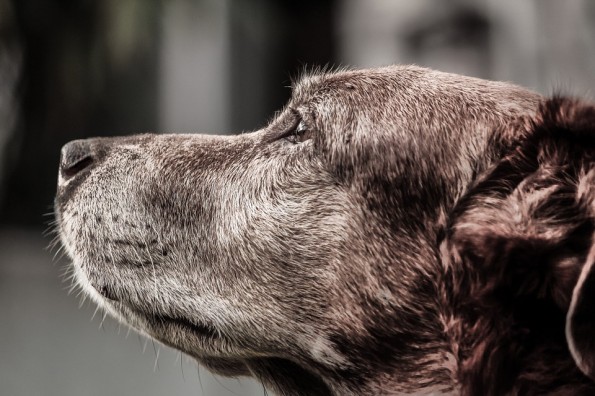 My senior dog seems confused sometimes and has had some behavior changes such as peeing in the house, which never used to happen.  Can dogs get Alzheimer’s disease?

Just as the rest of a dog’s body is affected by aging, so is the brain.  There are similarities between Alzheimer’s disease in humans and what is known as Cognitive Dysfunction Syndrome in dogs.

In Cognitive Dysfunction Syndrome in dogs and Alzheimer’s disease in people, studies have shown that there is an abnormal deposition of amyloid (a protein) in the brain.  This neurotoxic protein is deposited in a similar pattern in both diseases and can result in many of the same behavioral changes.

It is always important to first rule out an underlying medical problem as a cause for changes in a senior pet.  For instance, new onset of urinary accidents in the house may be due to kidney disease, a urinary tract infection, or diabetes, just to name a few possible causes.

However, once physical and medical problems have been ruled out, there are some clues that your dog may be suffering from cognitive dysfunction:

It has been stated that 50% of dogs over 8 years old have some indications of brain aging.  Progression of signs is typically very gradual, so they often go unnoticed in the early stages of this disease.  Not until changes start to interfere with your dog’s everyday life are the signs typically noted.

There are some treatments that have been helpful in improving cognitive dysfunction.  Therapeutic diets with specifically balanced anti-oxidants, vitamins, minerals and omega-3 fatty acids have been developed and may result in improvements as early as 2 to 8 weeks after starting the food.  A medication called Anipryl has also been beneficial in cases of Cognitive Dysfunction.  There are also some nutritional supplements that can support brain health.

Environmental enrichment is very important in helping to keep your dog’s brain healthier.  So get out there and play with your pet daily, take him on regular walks, introduce new toys and even provide new training.  “Use it or lose it” applies to our furry friends, too!